Learning from the Pivots Around Us

Home  >  Blog Categories  >  Career Advice  >  Learning from the Pivots Around Us 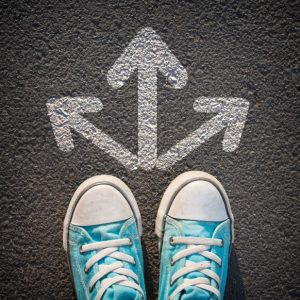 I find stories interesting about how entrepreneurs and businesses pivot and change directions. Later in this article I’ll share four of my favorite “pivot” stories from brands you will likely recognize.

But first let me tell you about Barry Sansoucie.

Barry Sansoucie was one of the most interesting entrepreneurs I knew in my early banking days. He was a person who saw every glass as half full. He was a veteran of the Vietnam War, where his job was to parachute solo behind enemy lines and clear areas of jungle vegetation for helicopter landings.

After the war Barry joined his father’s shoe heel business in Dover, New Hampshire and quickly assumed leadership there as the business slowly declined along with the domestic shoe industry. The business made injection-molded shoe heels. Barry started inventing new products that involved injection molding and helped the business “pivot” away from shoe heels. He was one of the early inventors of injection molded baseballs used in pitching machines. He made Frisbees and also designed and made disk-file boxes for floppy disks.

Sadly, Barry, a pilot, died in a small plane crash in 1991 on his way to Myrtle Beach, South Carolina. The business died with Barry and I’ve always wondered what might have happened had Barry lived.

Let me go off on a tangent here. Barry’s funeral was scheduled for a Catholic Church in Somersworth, NH. When Patti and I arrived at the Church we were both amazed at the huge turn-out. The large church was packed with perhaps 500 people and dozens of Catholic clergy. The only seats we could get were in the middle of a long pew in the middle of the Church. We had to step past about 10 people to get to our seats in the middle.

About five minutes later the mass started with the very formal procession down the center aisle. Once up front, the priest said a special prayer for the deceased, a Sister Mary. Patti and I looked at each other. We were at the wrong funeral! I am sure you can imagine the looks we got as we stood up and politely inched past all the people in our pew. We wondered what they thought of us as we walked out of a funeral for their beloved Sister Mary.

Yes, we did find the other Catholic Church and caught the end of Barry’s funeral and visited with his family and friends at the reception.

Here are four other interesting pivots.

Avon Cosmetics. Most of you know the cosmetic brand Avon. Avon, which started as the California Perfume Company, is one of the earliest network marketing businesses. It was started by David H. McConnell, a door-to-door book salesman, in the 1880s. To get himself in the door of a stranger’s home, McConnell offered a free sample of a perfume he invented that was appealing to the woman of the house. Once inside he sold his books and left free perfume samples with the books they purchased. Over time when he revisited the homes he found the women wanted to buy his perfume, not his books. So he pivoted and expanded his perfumes and cosmetics. The story of how McConnell later began selling dealer opportunities to women around the country is fascinating and a type of pivot, too.

Wrigley’s Chewing Gum. William Wrigley Jr., the son of a soap businessman, moved from Philadelphia to Chicago in 1891. There he started selling his father’s soap to area retail merchants. As an incentive to put soap on their shelves Wrigley gave away products like baking powder. However, like the Avon story, the merchants wanted more baking soda and less soap. This was Wrigley’s first “pivot.”

Then in 1893 he created a chewing gum called Juicy Fruit and gave away two free packs with every can of baking powder. The gum proved more popular than the baking powder, and world’s largest gum company was born. This was Wrigley’s second “pivot.”

Levi Strauss. The riveted Levi jeans many of us wear now were invented and patented during the California Gold Rush. Tons of canvas fabric to make tents for miners was brought to California via ship by the successful merchant Levi Strauss. Because of the plentiful supply of lumber, fewer and fewer tents were needed. As the story goes, a woman asked Levi Strauss if he had a stronger fabric for her to make pants for her husband. Strauss gave her the canvas. Word traveled about its sturdiness and Strauss “pivoted” into the jeans business.

YouTube. Today YouTube is the second most visited site every day behind Google. It is there we can find videos on just about anything we need. However, the goal when it was first developed in 2005 was for use as a video-dating site. While the inventors were disappointed with the slow adoption for dating, they were surprised to see users uploading many other types of videos. They recognized the opportunity and “pivoted” into the huge site we all use every day now.

I think we can learn a great deal from the many “pivots” that happen around us. Feel free to share your stories by posting a comment on our social media platforms!