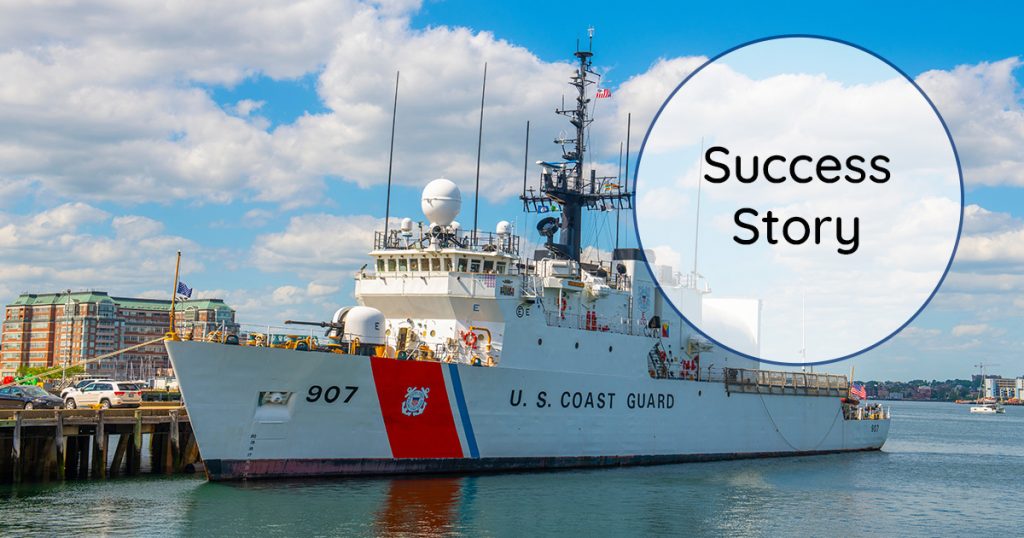 Steven Cusamano planned to retire from the U.S. Coast Guard, but not before he had a civilian job secured. Like many candidates, he searched online and applied for a job via Indeed. That job happened to be listed by Leddy Group, so the team contacted Steven to get him in touch with the right person for his job search needs: Ben Plaisted, Sr. Staffing Manager at Leddy Group’s Dover, NH location. Ben successfully found an even better job opportunity worthy of Steven’s extensive experience gained from over 21.5 years of service.

In the U.S. Coast Guard, Steven managed a fleet of boats along the Northeast coastline. He served in multiple roles over the years, most recently as Chief Machinery Technician & Regional Asset Manager. Steven explains, “Military-wise, I’m an engineer by trade.” His experience was vast, with duties ranging from mechanical engineering, diesel mechanics, small electrical equipment, small damage control, welding, hazmat, and more. He also earned his Bachelor’s degree in Homeland Security from the American Military University. With all of this knowledge and experience, Steven knew exactly what he desired for his first civilian job: “I wanted to be a facilities director or part of facilities, and I didn’t want to start at the bottom again.”

Ben went to work finding the perfect fit for Steven, reviewing all his job criteria and salary requirements. Steven says, “Ben spent a lot of time getting to know me and what I was looking for.” Ben is newer to working with veterans, but he’s learned that the candidates have many transferrable skills from the wide variety of positions in the military, including mechanical, warehouse, and production jobs. He says, “The key is taking a step back and asking questions to learn more about their experiences.” There was a facilities maintenance position available at a well-respected Leddy Group client, but the role was geared toward a less-experienced candidate. Ben knew the company was willing to entertain candidates outside of their target pay range, so he shared Steven’s resume as well as additional qualifications that made it clear what an attractive candidate the veteran was. The company was on board, the interviews went well, and Ben handled all negotiations to ensure the responsibilities and pay rate were what Steven says is “a perfect match.” Steven was hired on as Supervisor, Maintenance and Facilities in mid-October 2022!

In his new role, Steven works hands-on as part of a team to ensure the machinery, equipment, and systems throughout his employer’s Somersworth, NH facility all operate smoothly. His favorite aspects of his new position are the variety it offers as well as the collaborative, goal-oriented culture: “Nothing will ever be the same. You always come up with a new task, a new mission, every single day. It’s not routine. And you have deadlines and goals and different atmospheres, different people, to all support one mission, or one goal.” Steven is a great fit for the position and has already begun utilizing his extensive knowledge base to recommend and implement process improvements. He says the team is “actually liking a lot of ideas that I’m bringing, and slowly adapting changes into the maintenance system to increase accuracy in completion and tracking more man hours.” The commute to his new workplace is icing on the cake for Steven: “I didn’t want to commute too far because I was used to driving an hour and a half. Now I have a 4-mile drive!”

It wasn’t all smooth sailing getting started at his new position, however. Steven experienced a delay in obtaining important paperwork, his DD-214, which needed to be filed accurately for his retirement from service. Ben handled all communications with Steven’s new employer to ensure that this delay would not negatively affect Steven’s transition. Steven says, “Ben let them know what was going on, and we had no issues. He did that for me – I didn’t have to call them.”

Steven is grateful for finding an outstanding job and having a smooth transition to civilian life with Ben’s support. He had never worked with a staffing agency before, but looking back on the beginning of his job search process, Steven is happy to say, “Ben found a better match than what I applied for.” According to Ben, Steven made it easy because he “was beyond responsive and had a clear picture of what he wanted.” Steven is excited for this next chapter in his career. He says, “I’m looking forward to learning how everything works on the outside, to see how it differs, since basically my whole life has been in the military.”

Seeking your first civilian job can be a daunting process. Leddy Group, a NH Veteran-Friendly business, is dedicated to helping veterans and military spouses find the right job, company, and fit. As Steven says, “I had an outstanding experience… Ben stayed with me every step of the way.”