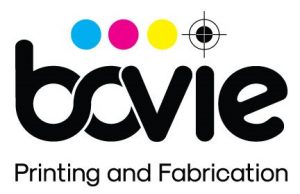 When you’re willing to consider new possibilities in your career, you open the door to success – just like Karen Cremins and David Joyal did. They both started as temp-to-hire candidates, rose swiftly to upper management, and are now co-owners of Bovie Printing and Fabrication in Bow, NH, along with President Tim Knowlton.

Karen and David found their way to Wilson Employment, a Leddy Group company, for different reasons.  In January 2011, Karen had the misfortune of being laid off by a struggling company, so she applied for unemployment and dusted off her resume. Wilson Employment scouted her right away – Karen’s work in accounting and human resources in the printing industry made her a perfect candidate for the temp-to-hire Accounting Manager opportunity at Bovie. Karen was delighted the agency found her: “If I didn’t get this job at Bovie, I was going to continue to work with my contact there, I liked her so much.” Fortunately, the job was a great fit. She came onboard February 2011 and transitioned to a permanent role in June of that year. Karen really enjoyed continuing her printing industry career and being back in the manufacturing world, and her career grew to her current role as owner and Vice President of Administration and Accounting. As Bovie is a small company with about 40 employees, Karen says it’s essential to take on multiple responsibilities. She heads up HR, safety, and as she laughs, “anything else that falls through the cracks!”

David found himself at Wilson Employment on a whim. A year after graduating college with a degree in accounting, he was busy with his DJ business, but David was looking for steady employment. “I didn’t really know what I wanted to do, so I was open to different types of positions. I wanted experience in multiple different facets.” He happened to live near a Wilson Employment location and stopped in to discuss job prospects. Owner Paul Wilson clicked with David and hired him to help with projects like public outreach meetings.

Wilson Employment had a close working relationship with the team at Leddy Group, so when Paul was ready to retire in 2014, Leddy Group stepped right in and acquired the brand. But before his retirement, Paul wanted to make sure David had something else lined up. There weren’t any openings in accounting at the time, but David’s flexibility led him to a temp-to-hire position in Bovie’s fabrication department. He quickly transitioned to an office support role, helping with estimating, accounting, order entry, and customer service. Then Bovie’s owner, Gary Shirk, asked David whether he’d considered working in sales, pointing out that David already had the skillset from running his DJing company. That really opened David’s eyes to the fact that his favorite pastime was truly a “stepping stone” for career growth. David flourished under Gary’s mentorship and eventually took over as owner and Director of Sales and Marketing.

Once Gary was ready to retire as Bovie’s owner, he had a stellar team to smoothly assume ownership: Karen, David, and Tim. After all, Tim has been with Bovie since 1981, and he and Karen had been running the company hands-on as Gary worked part-time leading up to his retirement. Gary sold them the company in June 2021, and the three co-owners have continued the success Bovie has enjoyed since 1950.

Part of owning and managing a business, of course, is staffing your departments with top-quality team members. Bovie is one of those great little companies that has many long-tenured employees – their head printer has worked there for 40 years, an estimator for 30 years, and some employees have even returned.  But when they need a position filled in fabrication, printing, quality, or other departments, Bovie recognizes the value in partnering with a staffing agency. Karen says it’s great working with Becky Fecteau, Regional Director at Leddy Group, because potential employees “coming through Leddy Group have already been screened…You know it’s a worthwhile candidate.”  David agrees: “We have had great success hiring folks through Leddy Group.”

Karen feels that working with a staffing agency puts candidates in a favorable light with employers, because it demonstrates that the job seekers “have taken the initiative, that extra step to use an agency, rather than just putting their resume out there.” David advises job seekers to be open-minded just like he was, saying, “That’s where a staffing agency like Leddy Group really shines. They’ll say, I know this isn’t exactly what you were looking for, but here’s what the position entails, and here’s why I think you’d be a good fit.”

Bovie has been a Leddy Group client for years, so Becky says, “I was thrilled to meet with Karen and hear the story about how she and David came from our affiliate agency! I am always telling candidates that you never know what doors will open just from an introduction. Karen and David’s stories are the perfect example of what working with an agency can do for your career, including company ownership!”

Karen and David’s rise from temporary employees to company owners and employers embodies what’s possible when you partner with a staffing agency like Leddy Group. As David says, “You might fall in love with a position that you just didn’t know existed.”